Festival of Learning -2019, signature event of AURO University –began at the university campus from Monday, July 15, 2019. President of Gujarat Sahitya Akademy, veteran journalist and eminent historian Padmashri Vishu Pandya was the chief guest of the inaugural ceremony of the festival. ‘Festival of Learning’ is a ten-day long event that focuses on introducing the new batch of AURO University students to the university life.

The inaugural ceremony began by seeking blessings from the Divine and lighting the ceremonial lamp. A film on AURO Integral philosophy was played in order to help students understand the reason behind developing the various faculties of consciousness.

The COO of AURO Hotels, India Mr. Suresh Mathur shared inspiring journey of the Rama family, the promoter of the AURO University, with students and gave introduction to AURO Hotels.

Vice Chancellor, Prof. Avadhesh Kumar Singh said in his inaugural speech that AURO is not yet another university. He said, “We are the first, apart from IITs to have a student induction program.” The VC also informed with pride that after looking at the AURO University’s ‘Festival of Learning’ program, the University Grant Commission has asked all the universities of the country to start an induction program for the new batch of their students. So far only Indian Institutes of Technology used to conduct such induction and orientation programs for their new students.

“Transformation is inevitable whether you like it or not”, he said.

In his keynote address to the young students, Chairman of Gujarati Sahitya Akademi Padmashri Dr. Vishnu Pandya quoted many anecdotes from Indian and Gujarati history. He recalled Narmad and glory of Surat’s entrepreneurship and its contribution to the country as an international business center for many centuries.

However recalling emergency period of India he asked students to continue their learning even outside of the boundaries of the university campus. He said that students should develop fearless attitude and be alert for the nation’s interests without having any expectations. He narrated the famous fairy tale of “The Emperor’s New Clothes”, in which the emperor puts on no clothes but still his courtiers appreciate his new invisible cloth, but a child tells him the truth about his bareness. He said, “As a young students you should have courage to say ‘No’ to the powerful fearlessly and without expectations.”

The expression of gratitude was proposed by Registrar Mr Ajay Kumar Yadav.

South Gujarat’s only UGC approved private university, Auro University’s vision is to be a premier University of Integral and Transformational Learning for future leaders, as it believes that education must not be limited to only academic learning.

On the day one of the festival following workshops were conducted at the university.

Campus as Living Curriculum:
The objective of the session was to make students aware of the Auro University Sustainable Living projects.
Introduction to AURO University :
Dr Rohit Singh and Prof Kamal Manaktola made students aware about the core values, philosophy, ideology and various courses offered across the University.
AURO University: Rules and Regulations:
Registrar Mr. Ajay Kumar Yadav acquainted the students about all the resources and the rules and regulations of the University.
Workshop on Paper Marbling by Mr Rohan Nanavati:
The students enjoyed the process of printmaking with oils paint and water. It encouraged them to stop worrying about getting their hands dirty and to practice being creative without being judged.
Workshop on Shibori (Fabric Dyeing) by Ms Prunal Khawani:
The art of resist dyeing was stared around 6th century in Japan. The word shibori came from there. Today students enjoyed dyeing workshop with the color assigned to their group: Courage. This technique allows to explore prints with free hand fabric play.
Workshop on Quick Sketching by Mr. Abhijit Pariyal:
The workshop was intended for the students to break out of their comfort zone and drawing to express. The students started with warm-up exercises and then went on to cartoon and caricature. They explored a Google initiative to develop a visual library through user drawings. They learnt basics of drawing emotions in inanimate objects. They also explored drawing with both hands.
Workshop on Dramatics (VAST) by ntegral leadership by Philippe, Thierry & Gopal:
The session included different activities which made the students aware about mind, body and emotions. The activity was focused on developing concentration of the mind aligned with the body and emotions.
Workshop on Origami (Paper Folding) by Mr. Krunal Zaveri:
The students were introduced to Origami. The session was relaxing and practical. Team building was an exercise that was focused upon in this task. 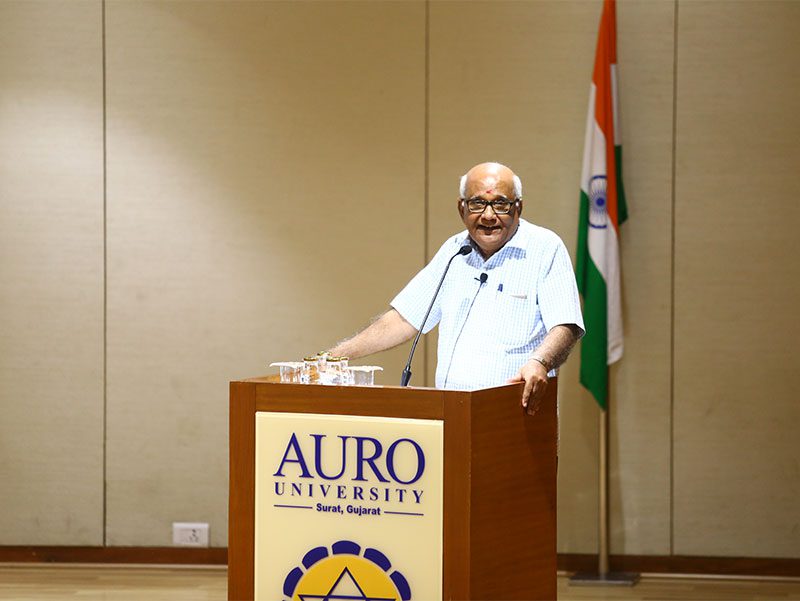 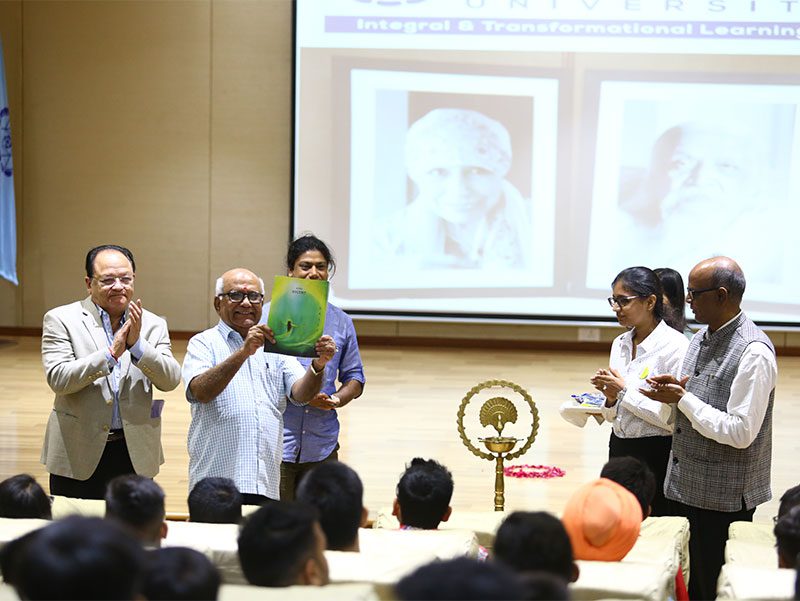